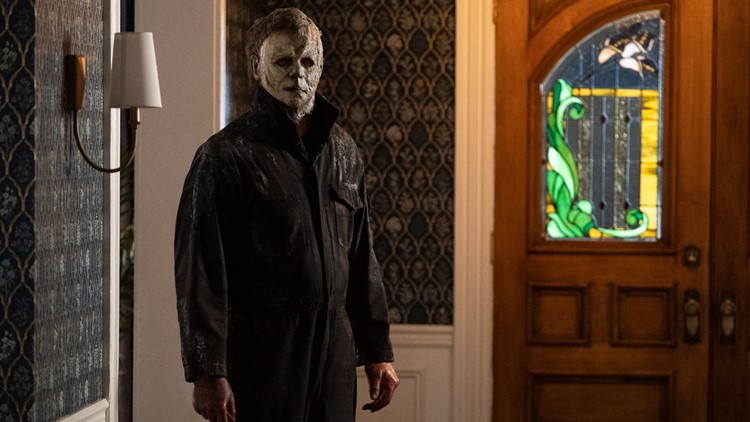 Could the popular slasher pic have had an even bigger opening weekend if it hadn’t debuted on Peacock at the same time?

NEW YORK — No matter how you look at the numbers, “Halloween Ends” had a good opening weekend.

Touted as the final showdown between Laurie Strode and Michael Myers, the slasher pic earned $41.3 million in ticket sales from 3,901 theaters in North America, according to studio estimates Sunday. It’s the first film to open higher than $40 million since “Nope” debuted in July and it surpassed its production budget, which has been reported to be between $20 and $30 million. Including international showings, it boasts a global total of $58.4 million.

“We are extraordinarily excited that Blumhouse once again delivered an incredible film and another No. 1 opening,” said Jim Orr, Universal’s head of domestic distribution. “Jamie Lee Curtis had audiences across North America engaged and terrified.”

The film also renewed an evergreen debate about day-and-date movie releases and some in Hollywood are wondering whether it could have been even bigger if it hadn’t debuted simultaneously on Peacock, NBC Universal’s streaming service.

Going into the weekend, some analysts had pegged “Halloween Ends” for an opening in the $50 to $55 million range. “Halloween Kills,” the previous installment in the David Gordon Green-directed “Halloween” trilogy,” opened day-and-date last year and still grossed $49 million on opening weekend.

Green’s first “Halloween,” by contrast, debuted to $76.2 million in 2018. But that was pre-pandemic, theatrical release only and the highly anticipated revival of a beloved franchise with good reviews. His subsequent “Halloween” films were more divisive among critics and fans, however. “Kills” had a 39% Rotten Tomatoes score while “Ends” has a 40% and still opened over $40 million.

“The day-and-date model was put to the test again, but I think this is a mandate in favor of the movie theater,” said Paul Dergarabedian, the senior media analyst for Comscore. “Audiences had the option to watch it at home but they chose to go to the theater.”

Many studios experimented with day-and-date releases during the second year of the pandemic to varying results, but 2022 has seen most returning to traditional theatrical-first releases — especially for their most valuable brands and franchises.

Still, it triggered a self-proclaimed “rant” from filmmaker Christopher Landon, who tweeted this weekend that he felt his horror film “Freaky” was hurt by its simultaneous release in theaters and streaming in November 2020.

“Stop doing this. Please. It doesn’t work. Studios: stop gambling with filmmakers and their movies to try and prop up your fledgling streaming services,” Landon wrote on Twitter. “I begged the studio not to do this…We got hosed.”

Though there was likely some financial impact on “Halloween Ends,” it’s hard to glean exactly how much money was left on the table with the release. Peacock is notably smaller than many of its streaming competitors, with 13 million paid subscribers reported at the end of July. Studios also rarely release specific streaming data.

Dergarabedian noted that it’s rare two have two R-rated horror movies at the top of the box office charts.

“The appeal of being scared in a movie theater is time honored,” Dergarabedian said. “Throughout the pandemic, horror movies have grossed over $1 billion, and that’s just domestically.”

Third place for the weekend went to Sony’s “Lyle, Lyle, Crocodile,” down 35% from its debut with $7.4 million, while “The Woman King” landed in fourth place with $3.7 million in its fifth weekend, bringing its domestic total to $59.7 million. “Amsterdam” rounded out the top five in weekend two with $2.9 million.

In limited release, United Artists Releasing’s Mamie Till-Mobley film “TILL” got off to a strong start with $240,940 from only 16 locations. Director Chinonye Chukwu’s fact-based account of Emmett Till’s mother’s quest for justice will be expanding in the coming weeks.

“Hats off to producers Barbara Broccoli, Keith Beauchamp, and Whoopi Goldberg who fought to get this movie made for decades,” said Erik Lomis, UAR’s President of Distribution. “This weekend, the film attracted an incredibly diverse, multi-generational audience, playing both ‘smarthouse’ and commercial venues. We’re off to a great start.”

Focus Features’ “Tár,” another buzzy awards contender, also expanded into 36 theaters this weekend — earning another $360,000 — and will continue opening in more markets over the next two weeks.

Estimated ticket sales for Friday through Sunday at U.S. and Canadian theaters, according to Comscore. Final domestic figures will be released Monday.