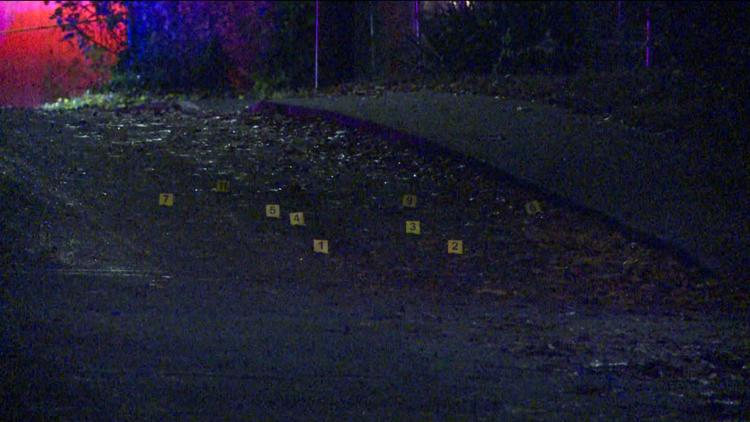 The two male juveniles are expected to survive; there were no immediate arrests, police said.

PORTLAND, Ore. — Two juveniles were injured in a shooting Friday night in North Portland, according to the Portland Police Bureau.

Officers responded to a call of shots fired around 7:15 p.m. on North Iris Way and Hartman Street in the St. Johns neighborhood.

Upon arrival, officers found two male juveniles who had been shot. Their injuries are not life-threatening and are expected to survive, police said.

KGW counted nearly a dozen markers on the street from video footage indicating where bullets landed during the shooting.

There were no immediate arrests made, according to police. Officers with North Precinct, the Focused Intervention Team and Enhanced Community Safety Team have launched an investigation.

This is the latest in a string of shootings that have wounded several teens over the past several weeks.

On Nov. 18, a 15-year-old boy was seriously injured in a shooting in Northeast Portland. He was shot multiple times, but survived his injuries, according to police.

The next night, police said a teenage girl was shot in North Portland, but her condition was unknown.

Two 17-year-olds who had just left Jefferson High School in a car were shot at while driving earlier that same week, police said. One of the students was hit in the shoulder.

This was the second shooting outside the North Portland high school within one month. On Oct. 18, two students were injured during a shooting near the school, according to a statement from Portland Public Schools.

Also last month, police also say a 15-year-old girl was severely injured in a shooting near Vestel Elementary School in Northeast Portland and she is expected to recover.

As of Nov. 30, there have been 1,185 total confirmed shootings in Portland this year, including 355 people injured in shootings.

Portland has been grappling with an ongoing increase in violence over the past few years. According to a PPB shooting incident statistics dashboard, there were 1,314 confirmed shootings in 2021, 920 in 2020 and 413 in 2019.