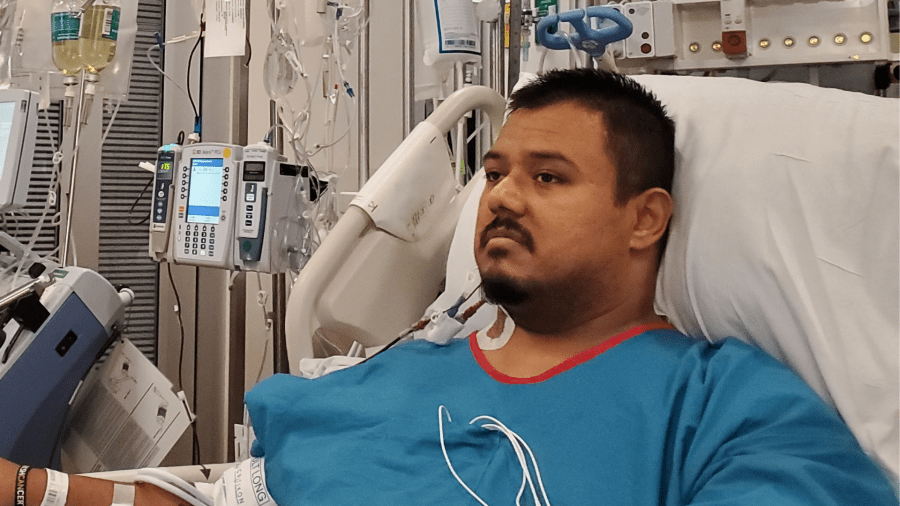 PORTLAND, Ore. (KOIN) – A local family says in 2022, they’re thankful for those who give the gift of life through blood donations, after a young father was recently diagnosed with a rare and aggressive blood disorder. However, he still has a long road to recovery as Portland doctors are left stunned on what to do next.

Last month, Mike Martinez started experiencing headaches and even collapsed at one point.

Katarina Elliott says her husband’s condition quickly deteriorated and by the time they made it to the hospital, his blood levels were critically low. He was diagnosed with a rare blood disorder — Warm Autoimmune Hemolytic Anemia — impacting only a couple out of every 100,000 people.

“He was deathly, deathly ill. He could’ve died. They said normally, patients in his condition don’t get walked in there. They get stretched in,” said Elliott. “His body is now producing antibodies that are attacking his red blood cells so what that’s doing is eating all the blood cells that produce oxygen and carry it through his body.”

Despite more than 40 blood transfusions, plasma exchanges, chemo and more, his levels are barely improving, and doctors told Elliott his is one of the most aggressive cases they’ve seen.

Elliott says they’re at a loss after spending more than a month at Providence St. Vincent with a few close calls, halting their income, exhausting their savings, and no idea when he could be well enough to come home.

“He’s such a great person,” said Elliott. “He works at the Moda Center, he has for years, so has his father, so they’re very rooted in the community, working for the Blazers.”

As the holiday season begins, Elliott hopes others out there can consider giving the gift of life by donating blood for the many in need — something that has truly saved Martinez’s life, as he’s received about one transfusion every day since he went in.

“It takes maybe an hour out of your day but it’s super important,” said Elliott. “It really is such a life-saving measure.”

While they’re spending Thanksgiving in the hospital, they hope Christmas will come with Martinez healthy and home.

Friends of the family have set up a GoFundMe to help with expenses. As for donating blood, there are a number of centers to check out, including Bloodworks Northwest which works with Providence, and the Portland Red Cross.