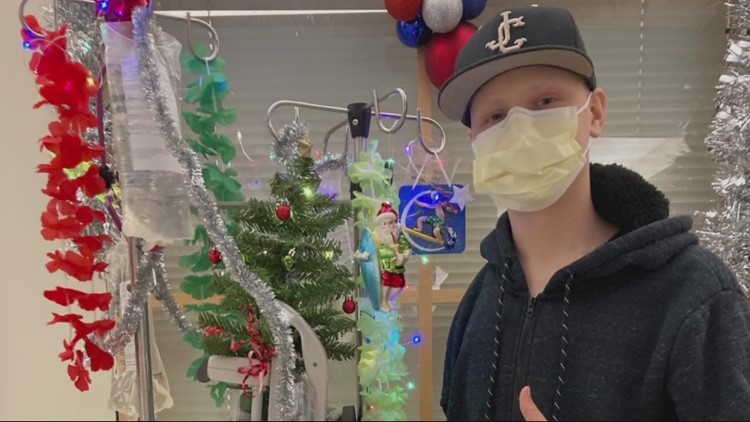 Two moms share a message of awareness and advocacy of childhood osteosarcoma after their children were misdiagnosed.

PORTLAND, Ore. — A diagnosis of childhood cancer is a nightmare for any family. The Sam Day Foundation is fighting to fund treatments for some of the rarest cancers found in kids: brain tumors and sarcomas. The local organization is raising awareness and bringing families together to find healing.

The Teed and Garcia families are connected through their journeys with childhood osteosarcoma. Both have boys who were misdiagnosed before having to make a life-altering decision to save their lives.

Tina Teed is a mom of three very busy boys.

“Very much so — baseball, Boy Scouts and all the activities,” she said.

Avery, her eldest son, is happiest at the pitcher’s mound. That’s also where he started to notice something was wrong with his arm.

“He started to have so much pain in his right shoulder that he didn’t want to throw and pitch anymore,” Tina said.

So, Avery did what you are supposed to do; he tried to rest his shoulder and apply ice. But when that didn’t work, Tina brought Avery to a pediatric orthopedist.

They told him he had “Little League shoulder,” a sports overuse injury, and treated it with physical therapy. His arm continued to swell, and the pain got worse and worse.

“That’s where we started to get more concerned as parents that we were not just looking at an overused arm from baseball,” Tina said.  “I had to push really hard, actually, to get him properly seen.”

When she pushed back, Tina said she was told to stay the course and that it was going to resolve itself.

“I would say it was the fact that my mom’s instincts, that parent-caregiver instinct was, ‘This is not okay,’ and I would not accept, ‘No, we can’t see you today’ for an answer,” she said.

With her son in agony and still without answers, Tina was fed up. She brought Avery to the emergency room.

“I probably made five consecutive phone calls within an hour to insist that Avery get looked at, looked at deeper, and that was the moment that the proper scan was made,” Tina said. “And we had the emergency room doctor tell us the news, that we were looking at cancer.”

Avery was diagnosed with childhood osteosarcoma, a cancer that begins in the cells that form bones.

The whole family was devastated.

“My beautiful, strong, athletic child was extremely sick, and in fact that it was life-threatening,” Tina said. “It was the absolute worst moment of my life, to hear those words.”

Every year about 1,000 new cases of osteosarcoma are diagnosed in the U.S., and nearly half of these are in children and teens, according to the American Cancer Society.

“When children are growing quickly they’re growing because their cells are dividing and their bones are growing and this is the most often time that we see osteosarcoma,” said Dr. Katrina Winsnes, pediatric oncologist at Doernbecher Children’s Hospital.

“The common story is that a 14 or 15-year-old child will be running track or playing basketball and normal activities and maybe they have an injury and then they end up at their doctor’s office with joint pain,” she said. “And you can imagine, getting from joint pain to a diagnosis of cancer can be tricky. Doctors think sports injury because of joint pain.”

“I think it’s just a factor of, osteosarcoma is so rare that there’s not enough knowledge about what to look for when the patient comes in the door,” Tina said. “So, when he went into the door with the orthopedist, it appeared as though he had been overusing his arm from baseball.”

Avery’s tumor was aggressive and grew visibly in size almost daily. He was treated with chemo, but the pain and tumor continued to grow.

Then, just one week before his 15th birthday, Avery had to make a life-altering decision. The only way to save his life was to amputate his arm and remove the cancer entirely.

“At first it was a shock. I thought it was a joke,” Avery said. “It took me, like, a day to really realize I was going to lose my arm.”

“I can’t be prouder of the way that Avery is the one that brought us all to peace with his new body,” Tina said. “He was instantly, ‘This is me. This is who I am.’”

“I look different and maybe my life is a little different, but I’m actually pretty fine right now,” Avery said.

Since his surgery, Avery’s scans have been cancer free.

He’s getting back on a pitcher’s mound with a new move he’s mastering. It’s something Avery and his brother kept secret from mom at first.

“They devised this technique where he can catch the ball, throw his mitt, re-catch the ball and throw it,” Tina said. “And one of the last games of the season last year, his coach put him in, and he made a play. He made an out with that technique. I’d never seen it. I didn’t know what he could do.”

Avery continues to be inspiring both on and off the baseball diamond. Through the whole process, the Teeds connected with another family who knows their journey all too well.

Erika Garcia is the mom of two boys nearing their teenage years.

“Things had a very smooth outlook, prior to our diagnosis,” Erika said.

In the summer of 2021, her younger son, Elias, started having some arm pain when he was shooting hoops.

“He would just kind of grab his arm and say, ‘Oh that didn’t feel good,’ and as the summer progressed we noticed it was consistent, it wasn’t going away,” she said.

They first attributed the aches to growing pains and thought it could be a ripple effect of distance learning.

“We were doing a lot of computer work. It was his right arm, I thought, maybe it’s because he’s using the computer so much and that’s the hand that he was using for his mouse,” Erika said.

The pain didn’t go away, but when it came to getting scans and X-rays, doctors pushed back because of Elias’s health history.

Erika and Elias have what’s called Li Fraumeni Syndrome. It is a rare hereditary disorder that increases the risk of developing cancer and makes X-rays riskier.

Elias is also on the autism spectrum and doctors thought the scans would be too much for him.

It wasn’t until a fall sent him to the hospital that he finally got an X-ray, which found his tumor.

“I think the hardest thing with autism and communication,” Erika said. “The communication style is, sometimes things are said or expressed in a way that others can fully grasp or understand.”

Elias’s treatment began with chemo, but the tumor continued to grow. Eventually, amputation of his arm was their only option.

“It was weighing the options of living or losing a limb and it’s still not okay. It still hurts,” Erika said. “It’s a wild way to go through childhood.”

Elias had his amputation in May 2021. There is now no evidence of cancer in his scans.

RELATED: ‘She fought as hard as she could’: Spokane girl flown home from Texas to spend time with family loses battle with cancer

Both the Garcia and Teed families have a long road ahead in their journeys, but they are finding hope through the community and each other.

“It’s so fortunate to not be alone and to meet such wonderful people who are going through the same journey that we are,” Erika said.

They’re connected in the mission of raising awareness for childhood osteosarcoma and the message of advocating for your child.

“When a kid says something really hurts, maybe, just go the extra mile to figure out what it is,” Avery said.

“Go ahead and give yourself permission to not be your normal more passive more polite self,” Tina said. “Lean in and if something doesn’t sound right to you — ask the question: ‘Could there be something more?’”