Elected officials come together to denounce threats towards election workers 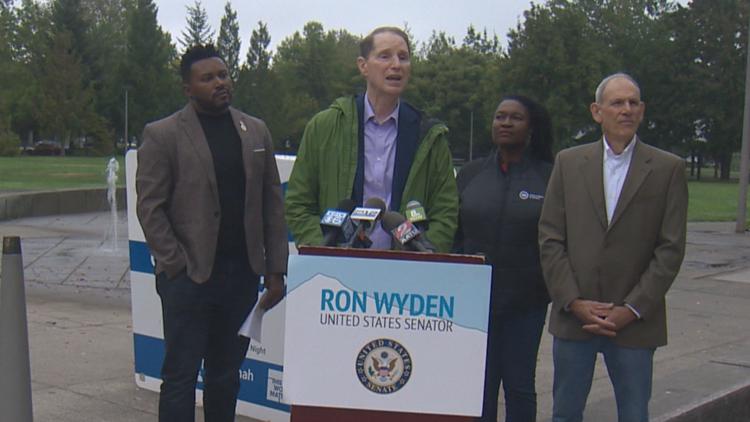 Sen. Ron Wyden and other city leaders held a news conference Tuesday to discuss election workers protection and the importance of the state’s vote-by-mail system.

PORTLAND, Ore. — With Election Day less than a month away, elected officials in Oregon came together during a press conference Tuesday morning to speak about the threats towards election workers and the integrity of the vote-by-mail process.

Oregon’s Sen. Ron Wyden led a press conference with other politicians about the issue. Portland’s Rep. Travis Nelson said he wanted to assure election workers that they are protected.

“There’s been a lot of elections officials in various counties across our state who have been threatened because the results that came out of their counties did not align with the expectations of those issuing threats,” Nelson said. “I am committed to assuring that our elections workers and volunteers are absolutely safe.”

RELATED: Here’s how to register to vote, update your registration or check your status in Oregon or Washington

Wyden also wanted to assure people that Oregon’s vote-by-mail system is secure. He said attacks on the system’s integrity come from conspiracy theories surrounding the 2020 election.

“A message to all of this election denying movement or anyone else that would attack our proven system, look at the facts,” Wyden said.

President and CEO of the Urban League of Portland Nkenge Harmon Johnson spoke about the importance of voting by mail and how it provides voting access to people who would not have it otherwise.

“Vote by mail makes life easier, it creates a savings for individuals as well as communities and allows organizations that give a darn about helping people vote, to use their resources differently,” Johnson said.

RELATED: Here are the biggest donors in the race for Oregon governor