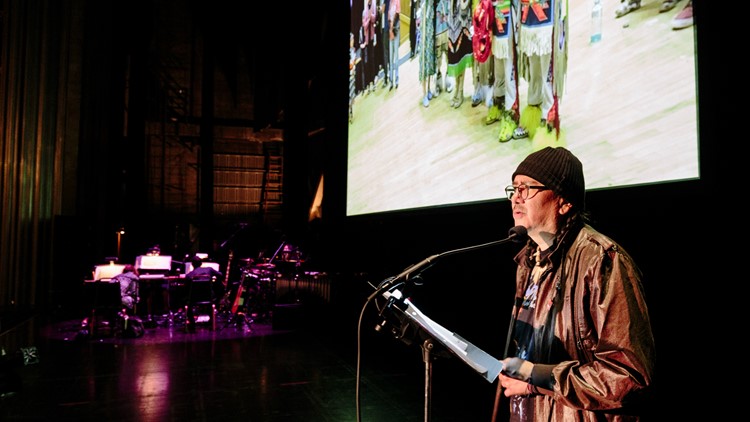 PORTLAND, Ore. — Pop-Up Magazine, a multi-media show that brings journalists and storytellers across mediums to create “magical” live shows and experiences, is making a stop in downtown Portland on Wednesday, Oct. 26, as part of its latest fall tour — Pop-Up Magazine: Love Stories.

The show will feature stories about love in all its forms, from notable writers, filmmakers, musicians, comedians, and actors.

Among them is Ben-Alex Dupris, an indigenous filmmaker and writer whose work focuses on pushing the boundaries of modernity and traditionalism, changing perspectives of Indigenous concepts without censorship.

“So Sweetheart Dancers, is an awakening to, you know, religious and government institutions that have tried to shape and reshape Indigenous narratives over the past 500 years,” explained Dupris. “And in this particular story, the story of Sean and Adrian as a Two-Spirit couple, which is a traditional way of LGBTQ+, you know, identification, they were eliminated from a dance competition for, you know — they tried to dance together.”

Dupris grew up as a member of the Colville Confederated Tribes in Washington. Before pursuing the arts, it was grounding for him to be part of a place that taught him what it means to be Indigenous, he said.

“And the story was really heavily influenced by my own belief that Indigenous people need to continue to understand our true traditions and our value systems, and not be led by the Catholic boarding school era, or Christianity as a whole, or government institutions that have don’t have our way of life best interests,” said Dupris.

Sweetheart Dancers will be part of his Dancing Against the Drum performance along with special guests Sean Snyder and Adrian Stevens. He will also be sharing his own poetry, an interpretation of what it means to be Indigenous.

“I’m really excited to be performing in the Pacific Northwest because I’ve always called this home. And I know how warm and accepting it can be for the people in Portland to listen and understand Indigenous narratives,” said Dupris.

Pop-Up Magazine will be held at the Arlene Schnitzer Concert Hall in downtown Portland on Wednesday, Oct. 26, at 7:30 p.m. Tickets are on sale now.