Downtown Portland church demolished after being destroyed in fire 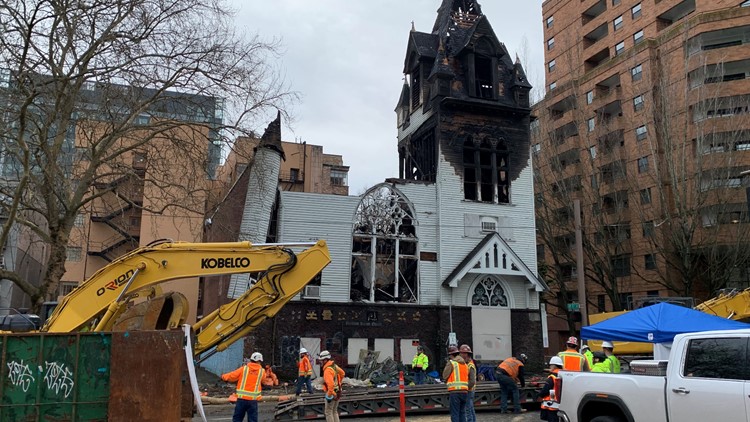 Detectives said the fire was intentionally set by Nicolette Storer, 27, who confessed to the crime.

PORTLAND, Ore. — A demolition crew began the methodical task of bringing down the vacant church — destroyed by fire — in downtown Portland Friday. The building was formerly the home to the Portland Korean Church.

The demolition grabbed the attention of dozens. Among the crowd, Wendy Rahm.

“We want some of anything we can get off of that,” Rahm said.

Rahm is hoping to preserve historical pieces of the building.

The church building as a whole is not due to a three-alarm fire early Tuesday evening. Flames ripped through the building at the corner of Southwest 10th Avenue and Clay Street.

“Unbelievable work on the part of the people who arrived,” said Rick Graves, a spokesperson for Portland Fire & Rescue.

Graves is referring to the firefighters’ efforts to save the house just about 10 feet east of the church.

“They made entry into the home and they were fighting the fire at the church through an elevated position through the home’s window,” he said.

It was an incredible feat to stop a blaze, investigators said, that was intentionally lit.

The alleged arsonist was identified as Nicolette Storer. The 27-year-old, who identifies as a woman, told detectives she heard voices saying she would be mutilated if she did not torch the church. Storer, who claims to suffer from schizophrenia, also reported taking 10 oxycodone pills before starting the fire.

“Tragically we have a community of folks actively using substances that are causing a lot of harm,” said Dr. Andy Mendenhall of Central City Concern.

Mendenhall is not directly connected to the case but said Storer appears to be an individual struggling with both substance abuse and mental illness.

“What we now know is there has been an insufficient system of care to meet the needs in the Portland metro region and beyond of folks with substance use disorder and folks with severe mental illness,” Mendenhall said.

A result of that is the fire at the old Portland Korean Church.