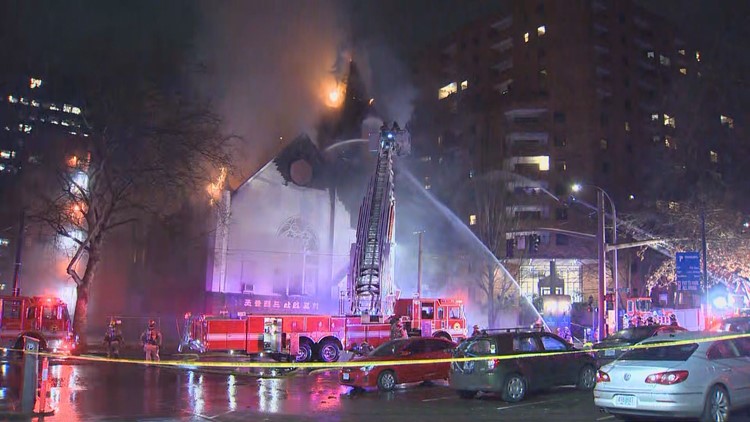 All the streets around SW 10th Avenue and Clay Street will remain closed until Wednesday morning, PF&R said.

PORTLAND, Ore. — An abandoned church in downtown Portland caught fire early Tuesday evening. Dozens of fire crews were on scene working to put out the flames.

Firefighters were first called around 5:30 p.m. to Southwest 10th Avenue and Clay Street. The building was formerly home to the Portland Korean Church but has been permanently closed and vacant for years.

Crews called additional resources to get the fire under control. A large plume of smoke could be seen for blocks. Fire crews said there were concerns the church wall may collapse and take out the overhead streetcar power lines.

“So we kind of have a lot of concerns coming together all at once,” said Rick Graves the PIO for Portland Fire & Rescue. “There’s a structure on the backside, a home, that had a little bit of fire hinging on it as well.”

Fire got into the walls of the structure and possibly into the attic of the backside structure. But firefighters were able to quickly eliminate the fire, Graves said.

All the streets around SW 10th Avenue and Clay Street will remain closed until Wednesday morning. PF&R suggest to avoid the area and plan ahead.

The latest update said they believed they had put out the “main body of the fire” and were trying a different strategy to put out the remaining flames.

There’s no word yet on how the fire started or if anyone might have been inside at the time.

“We do not know, but we believe that it was not occupied at the time,” said Graves. “A week ago it was marked safe and locked up by the owner, through our fire marshals office — that was validated.”

Two investigators were on scene to determine the cause of the fire.

The church also caught on fire in September of 2020.

This is a developing story. We’re working to get more information.