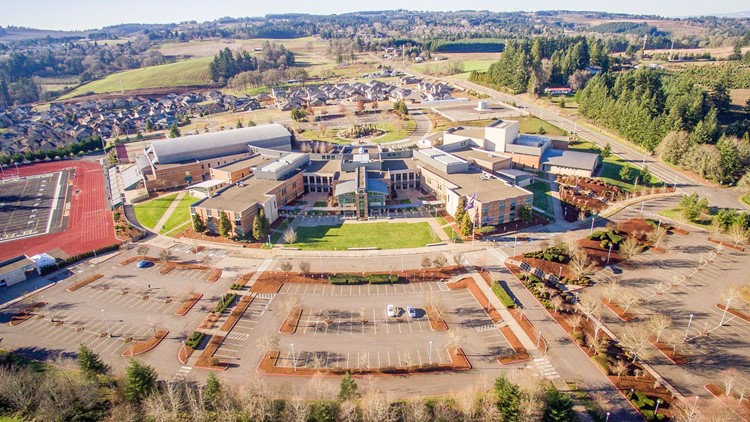 A threat made on social media led investigators to a 16-year-old home-school student and a 15-year-old West Salem High School student.

SALEM, Ore. — A threat made on social media against West Salem High School over the holiday break led detectives to refer two teenagers for possible criminal charges this week, according to the Marion County Sheriff’s Office.

The sheriff’s office said detectives and FBI officials learned of the threat on Tuesday. The threat, made over social media, indicated that an “act of violence” would happen when students returned to class next Tuesday, Jan. 3.

Investigators traced the threat to a home east of Salem, where they got in contact with a 16-year-old home-school student and their parents. Detectives developed probable cause to arrest the teen, MCSO said. The investigation also led to a 15-year-old student of West Salem High, the sheriff’s office said.

Both teens were referred to their respective county district attorney’s office for possible criminal charges.

Salem-Keizer Public Schools sent out a notice to families about the threat and subsequent arrests, echoing most of the same information shared by MCSO.

The district did indicate that the original threat was made anonymously, and was first reported to administrators before they contacted law enforcement and their own safety and security team.

“Safety is our most important priority,” Superintendent Christy Perry said in the message to families. “Honesty and transparency play critical roles in the safety of our schools, which is why we are sharing this message with you, and we hope you will partner with us in ending threats against our schools.

“Please talk with your student(s) and those in our community about the seriousness of these actions. No threat is ever a joke and the things we do online do not remain anonymous. Making a threat is a poor choice that could impact them for years to come.”

Perry assured families that the district had safety systems “firmly in place” as students return to the classroom from winter break.

To report school safety concerns, anyone can use SafeOregon by calling or sending a text to 844-472-3367 anytime. Tips also can be emailed to tip@safeoregon.com or through the SafeOregon app. In addition, Perry said, reports should also always be made to school administration and law enforcement.