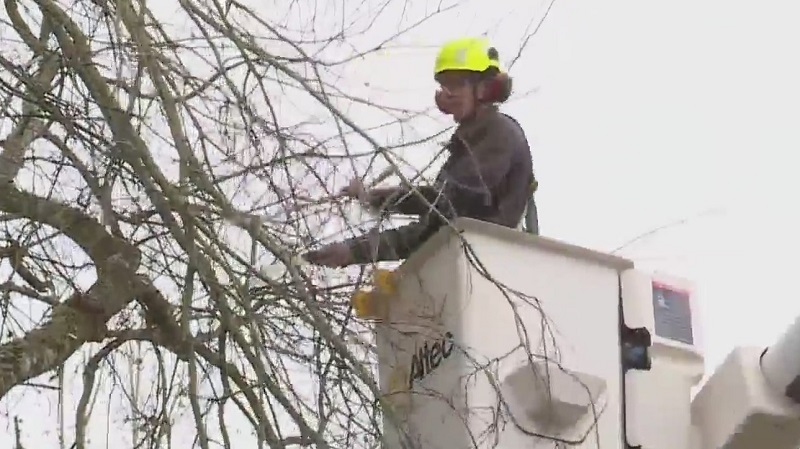 “It was super loud; it was blowing around. It was like the end of the world out here,” Disney recalled.

PORTLAND, Ore. (KOIN) — Hundreds of power crew members are still working to repair widespread damage and restore power to customers after more than 100,000 outages on Tuesday, following a winter storm in the Pacific Northwest.

Pacific Power, PGE and their contract crews are working around the clock to restore power to all customers.

A resident in Gresham, Kelly Disney, said the wind gusts in her neighborhood were insane on Tuesday.

“It was super loud; it was blowing everything around. It was like the end of the world out here,” Disney recalled.

It wasn’t long until their lights went out, Disney said. As of 5 PM, she said, their block had been without power for more than 30 hours.

“It’s very, very rough. My mom needs a C-PAP machine to sleep at night,” Disney said. “Our house is freezing. We can’t cook. Our food is rotting in our fridge, we’re hoping our freezer food is still good.”

As for the workers up on the lines, power companies say they’ve been working against all odds.

“It’s a big tangle. It’s a wet mess, but these folks have the training and the tools to be able to deal with it,” Tom Gauntt, spokesperson for Pacific Power.

The good news is there weren’t any new outages on Wednesday. But PGE says falling branches and debris wrecked more than 600 of their wires.

Meanwhile, Pacific Power is still assessing the damage to their system.

Thanks to the hardworking crews, Disney’s lights and heat are finally back on Wednesday night.

“I’m so grateful to all of them for all their hard work. I mean I can’t come up there and fix a line. I understand it takes time,” Disney said.

Pacific power and PGE said they expect to get the lights turned back on for most people within the next day or two, but PGE said due to the severity of the winds and how many outages they had spread out that some outages could extend into the weekend.