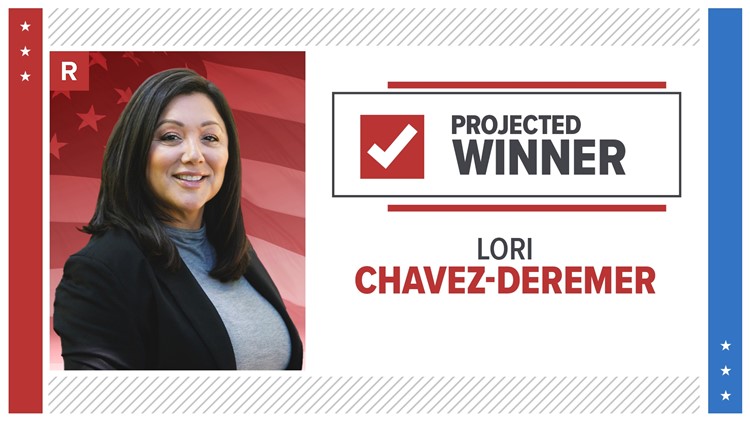 The race was too close to call for several days, but Republican Lori Chavez-Deremer was able to maintain her lead over Democrat Jamie McLeod-Skinner.

Chavez-Deremer released a statement shortly after she was projected the winner.

“As mayor of Happy Valley, I was proud of my bipartisan track record, and it was critical to approach every issue through a non-partisan lens,” said Chavez-Deremer. “That is exactly what I promise to do as your next Congresswoman. This is a historic victory for Oregon, but the work starts now. I vow to work for all Oregonians toward a better future for our children.”

Chavez-Deremer held a narrow lead in one of the state’s mostly closely-watched races for the first few days after Tuesday’s election, but the margin was too close to call until Friday.

The 5th District saw a shakeup last year when Oregon lawmakers conducted redistricting, the result of a 2020 Census that handed the state a new congressional seat due to population growth. The new maps shifted the 5th District boundary from an area encompassing Salem and part of Oregon’s north coast to one extending south of Portland and east to the city of Bend.

The primary outcome set McLeod-Skinner on a collision course with Chavez-DeRemer, former mayor of Happy Valley, Ore., in the November general election. Chavez-DeRemer pledged to support local businesses and police and address “the crisis on our southern border.”

Though Schrader held the 5th District through six terms in Congress, it became clear in the months leading up to November that the race would not be an easy win for McLeod-Skinner — in fact, polling began to show Chavez-DeRemer pulling ahead.

Beyond the individual appeal of the candidates to voters and a shifting political landscape at the national level, the 5th Congressional District of 2022 was quite literally not the same place it had been just a few years earlier. The race involved a sharp and somewhat unpredictable demographic shift.

Chavez-DeRemer and her class of Republican candidates for Congress received a relatively early boost during an August visit from House Minority Leader Kevin McCarthy and sitting Congressman Cliff Bentz, whose district encompasses much of Oregon’s expansive southern, eastern and central regions.

By comparison, it wasn’t until later in the race that Democratic candidates in Oregon began to see help from visiting party luminaries like President Biden, Sen. Elizabeth Warren and Sen. Bernie Sanders — but most focused their energies on stumping for gubernatorial candidate Tina Kotek, not McLeod-Skinner, as polling for the governor’s race likewise showed potential trouble for Democrats.

At the same time, national-level Democratic PACs demonstrated only a tepid interest in funding the race compared to the level of support received by Chavez-DeRemer from Republican organizations.