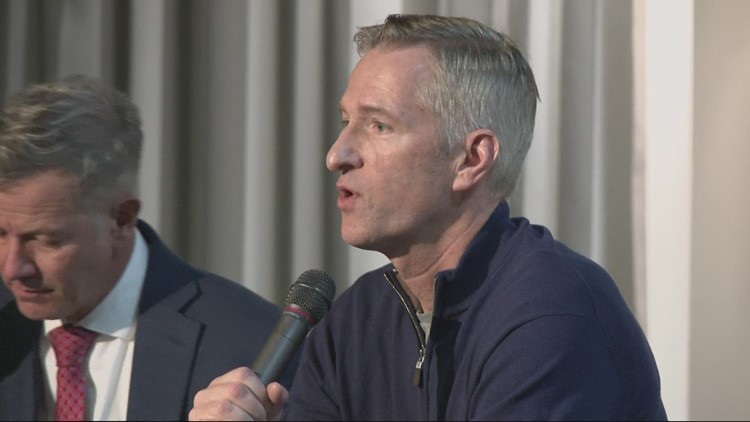 Speakers said that they’ve endured threats, break-ins, vandalism, lost revenue and patrons without enough attention from the City of Portland.

PORTLAND, Ore. — On Tuesday night, dozens of business owners from Portland’s Central Eastside gathered to let Mayor Ted Wheeler know how they feel about crime, homelessness and their perceived neglect by the city. It will surprise no one to find out that they were not happy.

First, there were the many frustrations. Here are two comments from Kyle Ranson, CEO of Showers Pass, a company that makes popular coats for cyclists and others:

“We’re on SE 6th — there was a massive camp right down there underneath 99,” Ranson said. “It was horrible for six months. The city finally came in and swept it. What did they do? They swept it round the corner in front of our building. We now cant even get a delivery into our building.”

“I actually had another instance this was happening — we were pleading with the city to come and clean it up because I had investors from Asia coming to look to make a multi-million dollar investment in a new brand that we’re launching, Vvolt, which is e-bikes,” Ranson continued. “The individual arrived from Taiwan and said ‘Yes, we want to invest in your business. We are not investing in this location.’ Because the building was surrounded by homeless camps.”

Marcy Landolfo of Rains PDX, a clothing company, explained that she recently closed one of her stores permanently after 15 break-ins. She wanted to know if the city can use federal law enforcement to clear out criminals.

“Is that an option? If we can clean out the crime then we can hopefully focus better on our citizens that need and want the help to get off the streets, that need and want the drug treatments and you know — separate that out from the outright criminals that have come here to exploit our city, exploit our resources and mostly exploit the good nature of all of us. Cause now we’re all sick of it,” Landolfo said. “So, just wondering if it’s an option to just address and clean out the crime on a very public, outward and visible level to send, just to send that note — we’re not gonna tolerate it.”

Mayor Wheeler did not answer directly, which suggests that the short answer is “No.” But he did say that for the first time in a long time, the Portland Police Bureaus has hired more officers than it lost this year — bringing 117 officers on so far. That got a round of applause from attendees.

Another business owner said that a vandal flooded his 6-story building with 30,000 gallons of water, and now he has to rebuild. He wanted to know about private security:

“Is there an opportunity to partner with the city if private equity would come to the table to help with neighborhood watch, professional people … I know you can’t recommend them, can’t tell us what to do tonight, but I’m willing to sit on a committee — put money, and I brought my checkbook tonight — so that we can have eyes on things from 5 p.m. ’til 2 a.m.”

Wheeler did not have a direct answer to that question either.

The gathering was organized by the Central Eastside Industrial Council, which is a group that’s spread throughout 622 acres of Portland’s Central Eastside. It includes 1,400 employers with 22,000 employees between them.

The council’s executive director told KGW that many have pushed the City of Portland to help with crime, homelessness and drug use for a long time. But last night, it appeared Mayor Wheeler was finally prepared to take action.

Wheeler promised to launch a 90-day plan to help clean up the area, similar to something that happened in the Old Town neighborhood over the summer. The Eastside plan would include things like more focused policework with more patrols.

The Old Town effort was not perfect, but it did reduce crime, graffiti and garbage in the area, at least temporarily. The city also swept several homeless camps there.

Many business owners openly worried about the danger posed by some of the people staying in camps, some who have mental health or drug issues, if not both.

“We’ve had violence, we’ve had staff members chased with machetes — like, we have had it all for a very long time because we are housed right across the street from St. Francis,” Garcia said. “So all of this … none of this is new to me. One of the things…the specific question I have for you today — and it is a difficult question to ask because I am a social worker at heart, it’s what I’ve been trained to do. So I have compassion in my heart and I also understand as a social worker that sometimes things that we do are band-aids. They may not help. And I think we have come to this place we have needed to come to for a very long time. We can not allow folks, as Jessie so eloquently put, to live on the streets and think that that’s compassion.”

“The mayor of New York City just announced that they are going to be hospitalizing folks involuntarily who are mentally ill,” she continued. “And I’m wondering at what point do we decide that something similar like that needs to be done. Because hearing that folks are being eaten by rats does not sound compassionate to me at all … and so we have to ask ourselves, at what point do we say that, ‘Yes there are folks who want us not to take these steps, but we must take these steps.'”

The issue of involuntary commitment has come up more and more often recently. KGW’s investigate reporter Evan Watson did a series of in-depth reports about the issue, in which experts explained how the pendulum may have swung too far. Many now feel that it’s too difficult to force someone with severe mental health issues to get help against their will, even if they are living on the street.

Wheeler did have an answer to Garcia’s question.

“You raised the very difficult question of involuntary commitment. And I’m going to be resoundingly excoriated for saying what I’m about to say … but I’m going to go back and base it on my moral and ethical judgement. And this is just personally me,” Wheeler said. “When I see people walking through the elements without appropriate attire — often naked, they’re freezing to death, they’re exposed to the elements, they’re out of their … they, I don’t even know if they know where they are or who they are. They need help and they need compassion. I am told by those in the legal system who are engaged with this question of getting people into help, whether its voluntary or involuntary, the threshold is too high. And so I would support a hard look at the legislative level of our involuntary commitment laws.”

As Wheeler indicated, any movement on involuntary commitment is not going to happen fast. Most of it would need to come from the state legislature, which will start meeting again in two months.

The 90-day plan to clean up the Central Eastside, on the other hand, is expected to get going soon. There is supposed to be a meeting on Friday to iron out the details on the timetable. KGW will be monitoring that progress.