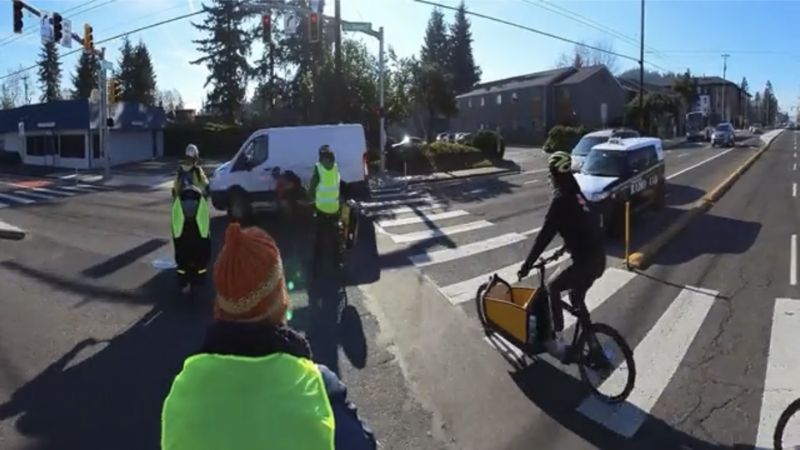 PORTLAND, Ore. (KOIN) — A close call happened to a group of Portland cyclists after one was hit by a van running a red light — and it was all caught on camera.

Police say the driver of the van fled the scene but some Good Samaritans followed and the driver eventually stopped and was arrested.

Mark Linehan was with a group of other cyclists riding to an event commemorating the World Day of Remembrance for traffic victims when he was hit. He says, luckily, he wasn’t seriously hurt, but just a matter of seconds could’ve had an entirely different outcome.

The group first stopped at the crosswalk on SE 117th, waiting for the signal to turn onto SE Division’s bike lane, waiting until the walk sign came on.

“We got to the crosswalk and I rode up onto the side to get hit the pedestrian walk button and we waited until the walk sign came on,” said Linehan. “We started to cross the street and got most of the way across and then a white van came blazing through the red light and hit the front of my bike.”

The entire incident was caught on video captured by another cyclist. The video shows other lanes of traffic were already stopped, but a white van continued to run the red light, hitting Linehan’s bike before fleeing the scene.

Portland Police say the light was red for the van and afterward, several witnesses — including one of the cyclists on an e-bike — followed the driver until he eventually stopped at SE 111th and Powell, identified as 25-year-old Yingzhi Chen of Seattle. Linehan was with a group of about a dozen other cyclists and says the damage could’ve been much worse.

“One adult had a child on the back,” said Linehan. “If the whole group had been in that lane, we would’ve been wiped out. It would’ve been terrible, but as it was, I’m just really lucky.”

BikeLoud PDX, the organization Linehan is a part of, recently filed a lawsuit against the City of Portland, citing a failure to meet safe street infrastructure as a part of the state’s pedestrian and bicycle bill. This comes after the early October death of local chef Sarah Pliner, killed by a semi while on her bike.

Following this weekend’s crash, they issued a statement, saying, “We can either spend resources on hospital bills and funerals or on making our streets safer. It is past time for city leaders to step up and provide the resources needed for the many plans we have developed to solve this problem.”

Linehan says the intersection they were at had well-marked crosswalks and bike lanes, but hopes more can be done to make drivers aware of safety while sharing the road with cyclists and pedestrians.

“Think about what would happen if their kids were in the crosswalk, or their parents or their brothers and sisters. Put it personal because it could’ve been them. It could be their own family,” said Linehan. “I think it would be very helpful if we had more public safety campaigns. I think public awareness is good and to some extent by that.”

Portland Police say the van’s driver, Yingzhi Chen, was arrested and cited with charges for the hit-and-run and reckless driving, and the van was towed.