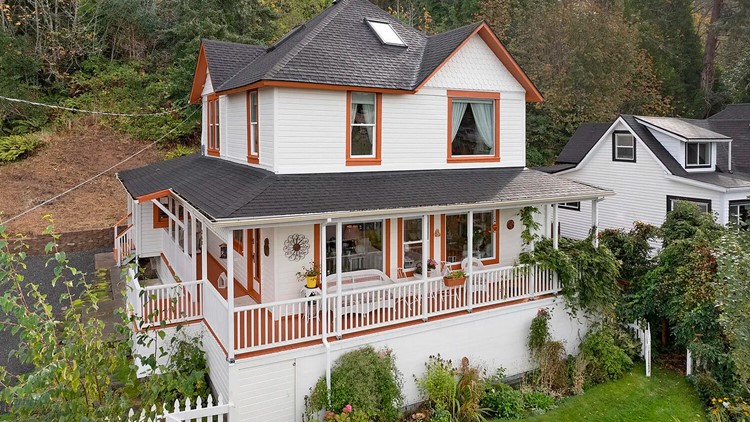 A super-fan of the 1985 film has purchased the Victorian-era home in Astoria, Oregon. He says his number one priority is preserving the iconic house.

ASTORIA, Ore. — A super-fan of “The Goonies” will soon be doing the Truffle Shuffle into his new home: the iconic white Victorian on a hill in Astoria, Ore., where the 1985 cult classic movie was filmed.

Behman Zakeri, a self-described “serial entrepreneur,” said he fulfilled a childhood dream when he purchased the house for just over $1.65 million.

As a self-proclaimed “Goonie,” he said his first priority is to ensure the house will never say die.

“The reason I’m buying it is for the community,” said Zakeri. “Somebody’s got to be the caretaker, somebody’s got to preserve the landmark. Somebody has to keep it original and not get demoed.”

“Goonies” character Mikey Walsh, played by Sean Astin, lived in the house in the film. In the Steven Spielberg-directed movie, Walsh and his fellow Goonies find a treasure map in the attic and go off on a treasure hunt through a tunnel in the basement of the house, evading a dangerous group of criminals who want the loot for themselves.

“I told the agent, if I’m up against Steven Spielberg or Sean Astin or something, I’m out!” Zakeri said.

The house, which is in a residential neighborhood in the coastal Oregon city of Astoria, has attracted fans of the movie for years. Its new owner hopes to keep it accessible for tourists who want to pay a visit.

“Goonies are welcome,” said Zakeri. He said he has no problem with fans taking selfies at the property — he was once one himself — and only asked that they be respectful of the surrounding neighborhood.

Popularity among tourists was at times a sticky subject for the home’s previous owner. After the 30th anniversary of the film brought as many as 1,500 visitors a day to the house, the owner temporarily covered the house in tarps and posted “no trespassing” signs prohibiting tourists from walking up to the property. She later reopened the home to the public. The city of Astoria also imposed strict fines for parking in “no parking” areas in the neighborhood because of the amount of tourist traffic.

Zakeri, who lives in the Kansas City area, does not plan to live in the home full time.

Astoria’s recent ban on short-term rentals, like Airbnbs, means the “Goonies” home won’t be available for tourists to rent for a weekend, but Zakeri did not rule out the possibility of renting to longer-term tenants.

“I think the key is, even if anybody rents it, that they acknowledge that part of living in the Goonies house is adjusting to the traffic,” he added.

What good is living in the house of your childhood dreams if you can’t share it with your childhood best friend? After originally planning to split the “Goonies” house with his friend and childhood neighbor, Michael Eakin, they struck gold when they found out the house next door was going up for sale, too. Three decades later, the friends will become neighbors again.

“I said ‘Hey Mikey, how about I buy the Goonies house and you buy the house next door?’ and he was like, ‘Done.”

Spielberg hasn’t come calling about a sequel just yet, but Zakeri said he’d love to see Hollywood use the house in the future.

The home’s official closing date on Wednesday happened to come just hours after actor Ke Huy Quan, who played Data in the “Goonies” won a Golden Globe for best supporting actor in a film for “Everything Everywhere All At Once.” After the awards show, he recalled how there have been “numerous scripts” for “Goonies 2” over the last 30 years and he remains “open” to revisiting the character.