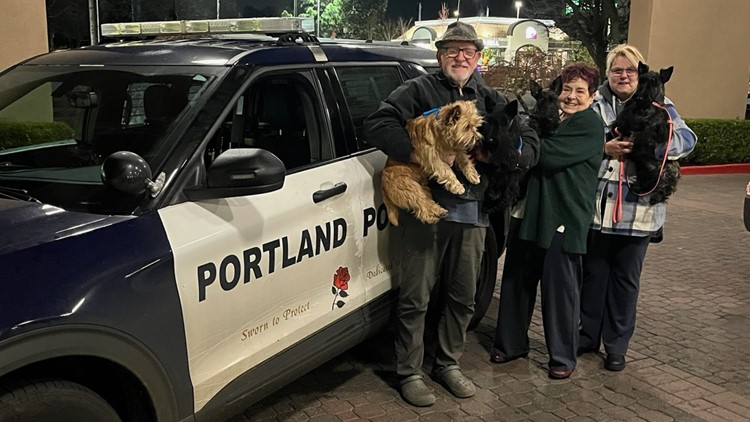 The van was taken Saturday morning from a North Portland hotel parking lot; the van was later found abandoned with the dogs still inside

PORTLAND, Ore. — Four show dogs were reunited with their owners on Sunday after the van they were being carried in was stolen from a parking lot on Hayden Island the day before.

The dark blue Mercedes-Benz Metris cargo van was taken Saturday morning after it was briefly left running in the parking lot of a hotel on North Jantzen Drive, police reported.

The four show dogs were in crates inside the van — three Scottish Terriers and one Cairn Terrier, each about 22 pounds. On Sunday morning, a community member found the van abandoned on a road in Vancouver, Washington, with the dogs inside, and they were returned, police said. The van was damaged and not drivable.

Vandra Huber, owner of two of the dogs, said she got them back at about 6:30 a.m. Sunday morning.

The man told Huber he had been driving to work in the morning when he came across the van. Worried about the dogs, he took them out of the van and ultimately brought them to the hotel where their owners were staying.

The owners offered him a cash reward but he turned it down, Huber said.

One of them had driven to the front of the hotel, then went inside to get the other two people. They left the van running at the front entrance.

“Someone had to have been watching, dashed over, and literally drove the van away,” Huber said.

When they discovered what happened, they were in shock.

“Ed was screaming, saying ‘Oh my God! Oh my God!’ I ran out with just total disbelief because we’ve never had anything like this happen in the 20 years we’ve been to Portland,” Huber said.