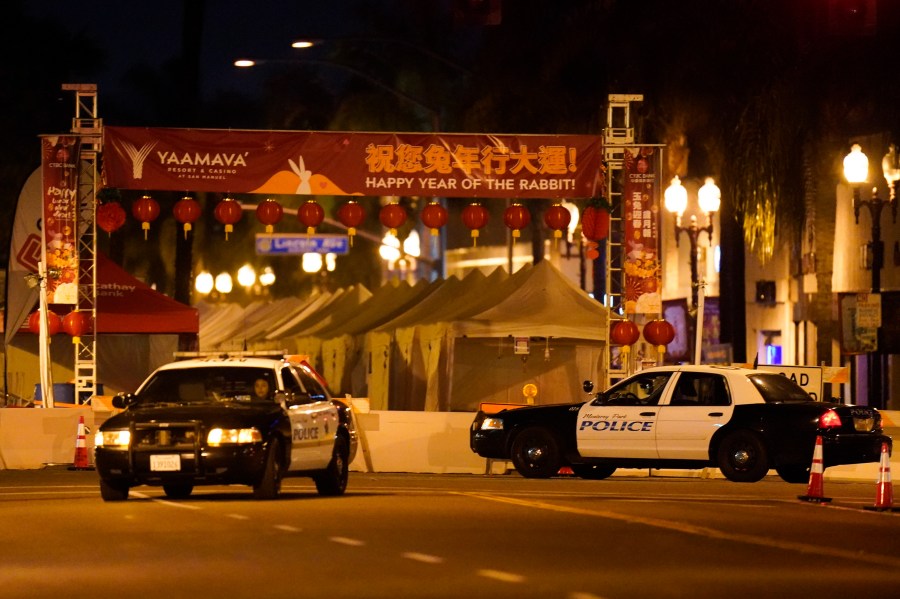 MONTEREY PARK, Calif. (AP) — A gunman killed 10 people and wounded 10 others at a Los Angeles-area ballroom dance club following a Lunar New Year celebration, setting off a manhunt for the suspect in the fifth mass killing in the U.S. this month.

Capt. Andrew Meyer of the Los Angeles Sheriff’s Department said Sunday that the wounded were taken to hospitals and their conditions range from stable to critical. He said the 10 people died at the scene in the city of Monterey Park.

Meyer said people were “pouring out of the location screaming” when officers arrived at around 10:30 p.m. Saturday. He said officers then went into the ballroom and found victims as firefighters treated the wounded.

Meyer gave no description of the male suspect or the weapon he used, or why police gave no information on the shooting for hours while the shooter apparently remained on the run. He also said police were investigating another incident in the nearby city of Alhambra, where a similar business, the Lai Lai Ballroom, had police tape across its front door and an officer guarding it.

Detectives could be seen working near the open back door, where a woman wearing gloves was carefully examining the door handle as though checking for prints. Officials gave no details on what had happened and it was unclear if this was the incident investigators were examining to see if there was a connection to the Monterey Park shooting.

Meyer said it’s too early in the investigation to know if the gunman knew anyone at the ballroom or if it was a hate crime.

“We will look at every angle,” Meyer said.

Gov. Gavin Newsom decried the violence at what should have been a happy event.

“Monterey Park should have had a night of joyful celebration of the Lunar New Year. Instead, they were the victims of a horrific and heartless act of gun violence,” he wrote on Twitter. “Our hearts mourn as we learn more about the devastating acts of last night.”

The shooting happened in the heart of downtown Monterey Park where red lanterns decorated the streets for the Lunar New Year festivities. A police car was parked near a large banner that proclaimed: “Happy Year of the Rabbit!”

The Lunar New Year celebration in Monterey Park is one of California’s largest and had attracted tens of thousands throughout the day. Most of the residents of Monterey Park, a city of about 60,000 people that sits at the eastern edge of Los Angeles, are Asian immigrants from China or first-generation Asian Americans.

Two days of festivities, which have been attended by as many as 100,000 people in past years, were planned. But officials canceled Sunday’s events following the shooting.

The tragedy marked not just the fifth mass killing in the U.S. since the start of the year but also is the deadliest since May 24, 2022 – when 21 people were killed in a school in Uvalde, Texas, according to The Associated Press/USA Today database on mass killings in the U.S.

The database also shows that 2022 was also one of the worst years ever in terms of mass killings, with 42 such attacks – the second-highest number since the creation of the tracker in 2006. The database defines a mass killing as four people killed not including the perpetrator.

The latest violence comes two months after five people were killed at a Colorado Springs nightclub.

The White House said that President Joe Biden was briefed on the situation by Homeland Security Adviser Elizabeth Sherwood-Randall.

“The President has been briefed by the Homeland Security Advisor on the mass shooting in Monterey Park. He directed her to make sure that the FBI is providing full support to local authorities, and to update him regularly today as more details are known.”

The shooting occurred at Star Ballroom Dance Studio, a few blocks from city hall on Monterey Park’s main thoroughfare of Garvey Avenue, which is dotted with strip malls full of small businesses whose signs are in both English and Chinese. Cantonese and Mandarin are both widely spoken, Chinese holidays are celebrated, and Chinese films are screened regularly in the city.

The business offered dance lessons from Tango to Rumba to the Fox Trot, and rented its space for events. On Saturday, its website said it was hosting an event called “Star Night” from 8 p.m. to 11:30 p.m..

Seung Won Choi, who owns the Clam House seafood barbecue restaurant across the street from where the shooting happened, told The Los Angeles Times that three people rushed into his business and told him to lock the door.

The people said to Choi that there was a shooter with a gun who had multiple rounds of ammunition on him.

Wong Wei, who lives nearby, told The Los Angeles Times that his friend was in a bathroom at the dance club that night when the shooting started. When she came out, he said, she saw a gunman and three bodies.

The friend then fled to Wei’s home at around 11 p.m., he said, adding that his friends told him that the shooter appeared to fire indiscriminately with a long gun.